It has been a busy few weeks with us, which has left little time for making, but I’m trying to squeeze bits in here and there.

We spent the glorious sunny bank holiday weekend with friends and  family in Cambridgeshire and Suffolk respectively. Niblet and I spent a day in Cambridge, while Hubbie was on a course. We went to a toddler group; went to look at bones in the Zoology Museum, which got a bit scary for Niblet when he saw the elephant skeleton up close; saw a small Quentin Blake exhibition and suits of armour at the Fitzwilliam Museum; then went to watch people punt on the river whilst sharing a toffee ice-cream.

Our friends have recently moved to Cambridgeshire, so this was our first visit to their new place. Niblet made friends with nearly all their animals almost instantly, which was a surprise because he doesn’t really encounter dogs at all and the only time he sees cats is when we are chasing them away from our veg patch!! He is a fan of his Uncle’s chickens, so he wasn’t phased by other chickens. But the highlight of the weekend for Niblet (& Hubbie, I think) was sitting in a tractor. He spent most of the weekend pretending to drive it and feed his imaginary livestock.

We also had a lovely time seeing my brother and his heavily pregnant wife (& their chickens). We helped sort out some of the baby stuff we have passed on and put new tyres on Niblet’s fantastic 4-wheel drive pushchair that they have inherited. It has made me realise that I really need to get on and make the rest of the things for baby’s present pile.

Since we returned from our lovely, long weekend Niblet has been struck down with chickenpox, which has meant long days indoors trying to find enough to occupy him. Fortunately he hasn’t felt too poorly with it (although that would have meant a bit of rest while he had sofa time!!). Unfortunately the weather has been terrible, so getting any fresh air in the garden has been a bit tough too.

We have done den-building in the living room; painting huge sheets of paper green (for his 3 1/2th party – more details at a later date); making pine cone people (well, half making pine cone people!!); playing mice, under the duvet; been for a sneaky day out with Grandma – to a place with very few people and lots of space.

Grandma took us to Hare Hill National Trust garden, it was great. The weather was a bit miserable, we had to have our picnic in the car. Fortunately, the poor weather meant we didn’t encounter too many people, so we didn’t feel so bad about getting him out of the house. It dried up a bit, so we went off round the gardens to look for all the wooden hare sculptures – Niblet loved it. There was also a bird hide, Niblet used his hand ‘binoculars’ to spot lots of little birds on the feeders, when we heard ‘look there’s a big bird, mum’, he had spotted a pheasant too. It’s also where we picked up the pine cones for these folks. 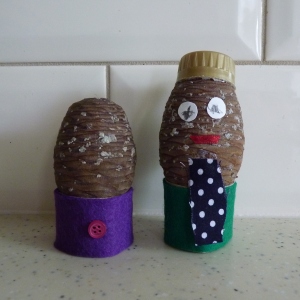 On the way there, (well, not strictly on the way) we stopped off at Leon’s in Chorlton. A fantastic, but sometimes pricey, fabric store. I had been after some terry towelling to make something else for ‘the baby’, but had had no luck in Manchester at the weekend. I got what I wanted…. and some other checked fabric that will make Niblet a gorgeous shirt, someday!!

So, yesterday I washed and ironed the towelling, plus some other lovely fabric (bought ages ago with nothing specific in mind), ironed the remainder of one of Hubbie’s old shirts (previously used here and for another item in the baby present pile) and cut out lots of pieces. I will be able to make extra, to hopefully sell at some future date. OOH! it’s all so secretive – all the goodies will be revealed once they have been presented to the newborn, when he arrives.

I still haven’t made any progress with the fabulous ornate picture frame that will be a chalkboard one day, but I am planning too. It’s on my list with all the other things, but most of the other things have to be done before the end of June, so it may have to be bumped down the list!

One thought on “keeping busy”