Today has been a delighful day of Autumn colour.

I don’t know if it’s having a nearly 3 year old or because I’m approaching middle-age, but I am really loving watching the birds in the garden as I wash up!!

The other week we had a Lesser Spotted Woodpecker and 4 Goldfinches, at the same time. This week I’m pretty sure we’ve been visited a couple of times by a Wren. We have regular visitors too; Robin, Blackbirds, Coal Tits, Collared Doves, Starlings and the ubiquitous Magpies and Pigeons (neither of which I’m particularly excited to see) We have had other more exciting looking birds that I fail to identify, despite having the most beautiful bird book ‘Our Garden Birds’ by Matt Sewell. (Maybe not the most birdspotter-y type book though)

I also enjoy watching the garden change and love when the sun lights up all the plants. So, I went out for a few pictures today.

It’s strange as many of the trees and shrubs have lost their leaves, but I still have Lavender and Nasturtiums in flower. 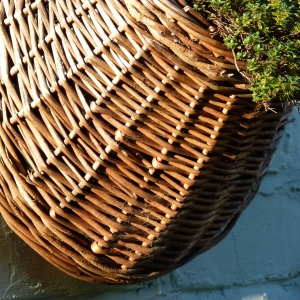 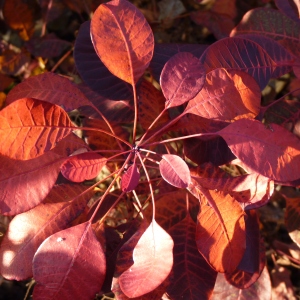 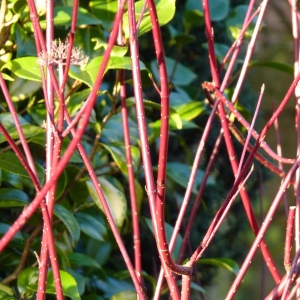 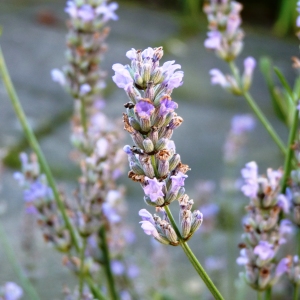 We also had the most amazing skies this evening. I was walking home and sped up, so I could try and get to my camera for a few pictures. It was difficult as I had to lean out of a very small upstairs window and try to avoid all the surrounding houses!! 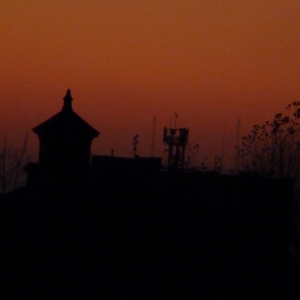 Last, and by no means least, comes Niblet’s latest work of art. When we were out yesterday morning he stopped and picked something up. “Look mummy, a Sycamore key” I nearly choked – how did he know that?

Grandma had apparently told him at the weekend on their trip to the park.

Anyway, on our way home we had to stop and pick up lots of them. He decided he wanted to make a picture with them.

He picked out which colour card he wanted and started arranging his seeds. First they were a football pitch(?), then he wanted to make an apple tree but very quickly changed his mind, then decided on a caterpillar, not just any caterpillar but The Very Hungry Caterpillar (I had nothing to do with any of these).

I duly helped him glue all the seeds on and, when they had dried, I got out the red and green paint for him. He wanted the book so he could see a picture of the caterpillar while he painted.

This morning, I cut out some yellow and green stickers for him which he stuck on for nose and eyes. 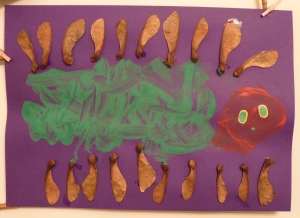 It now has pride of place with the firework picture on the fab hanging thingy.