When I opened my Valentine from Hubbie last Friday (with the one I sent him also on the dining room table) Niblet wanted to know why he didn’t have one. This has never been an issue before (he’s 4!!), so I hadn’t even thought for a moment that he’d want one too. While he was at nursery I quickly whipped him up a card, made from the envelope that my card came in – but by that point in the afternoon, I don’t think he was too bothered any more!

Despite feeling rough for what seems to be forever, I have managed to start a long overdue project. Hubbie often makes noises about the amount of fabric around the house (he has even consigned a load of it to the loft), so I decided I would try to use some up. I had an idea in my head that meant adapting patterns and then working with no instructions, not something I have really done before.

I used this pattern and one from an old copy of Sew Hip magazine, as neither was quite what I wanted. 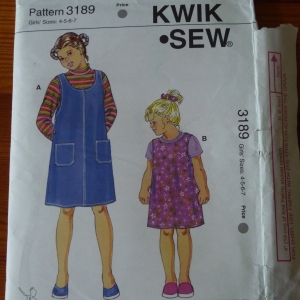 The fabric I am using is one of a number of 1970’s groovy duvet covers that I have picked up in charity shops, plus an old sheet for the plain side. I have decided to make a reversible dress for a little girl. This will then mean the dress is less see-through and uses up twice as much of my fabric pile!! Plus it gives 2 options for wearing.

So far I have sewn up the patterned side and put pockets on the front of the plain side. I think the pockets may have been a little ambitious (again no pattern or instructions – just made them up) and they are not exactly the same size or even completely level. I think that may be easier with a rectangular patch pocket, maybe next time.

Now I just have to make a button loop and then work out how to put it all together to fit the picture in my head!!

Did you see the Great British Sewing Bee last night? I have been waiting for this to return for a number of reasons, obviously the sewing, but also the very lovely Patrick Grant.

I was really impressed by the nightie the policeman made and I like the skirt update from the guy from Bradford. Some of the fabric they have available to work with is heavenly – how I wish that I could afford stuff like that.

It made me want to go and sew straight away, but my other current obsession got the better of me. I am working my way through series 3 of Spiral (Engrenages) a gritty French police/law series. I got the box set of series 1-3  Christmas 2012, but hadn’t got around to watching them until this year. I had forgotten how good it is and am now watching a couple of episodes at a time, where possible. Series 4 is on my wishlist and apparently Series 5 is due on French telly next month.